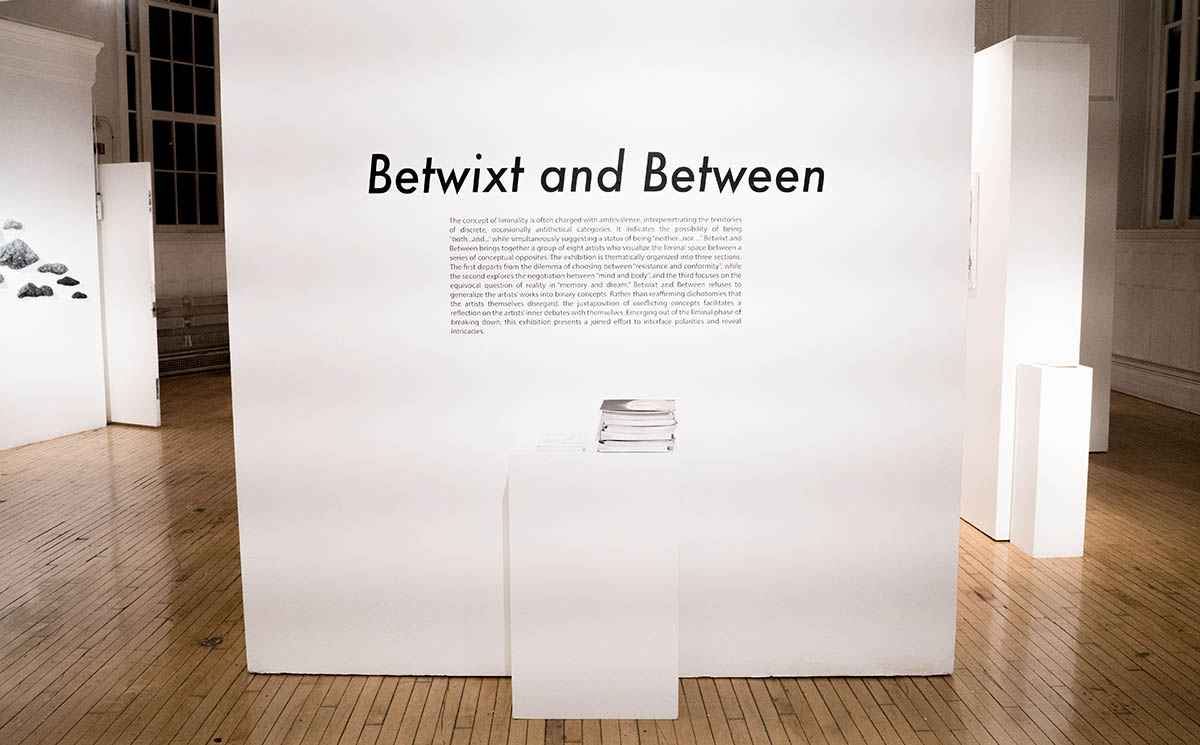 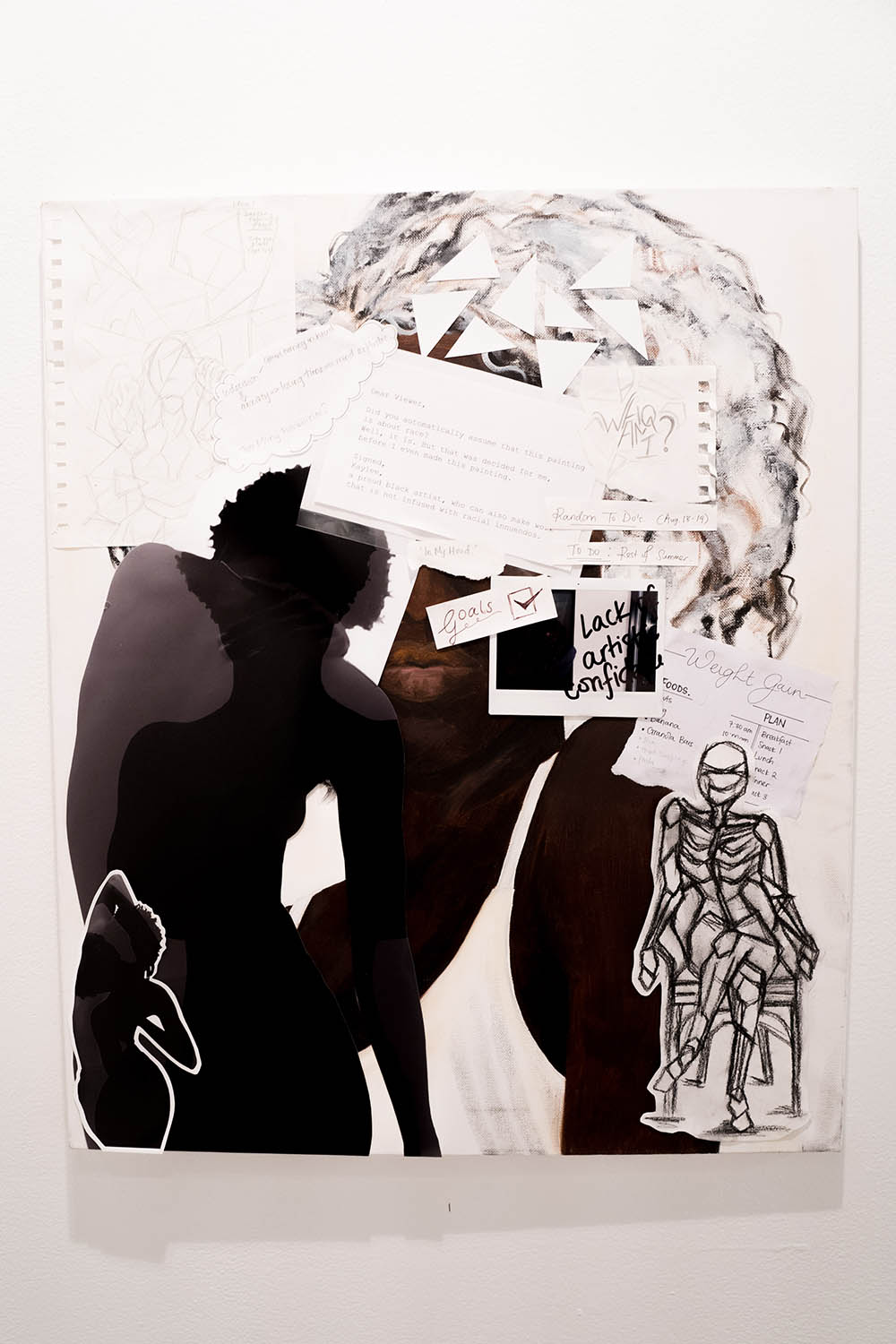 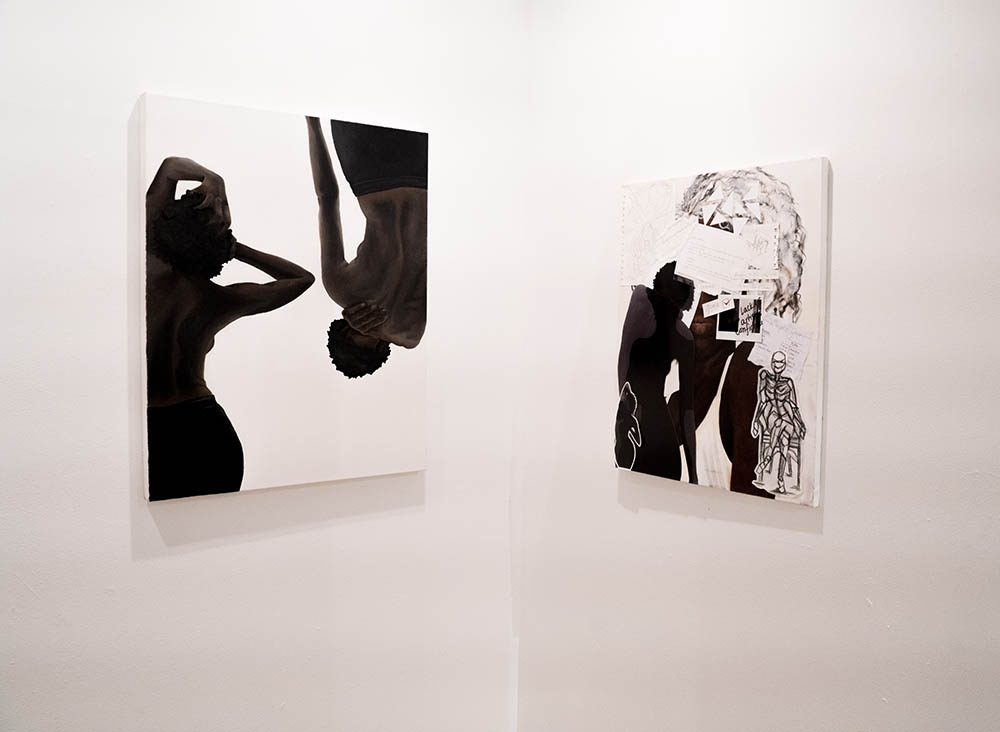 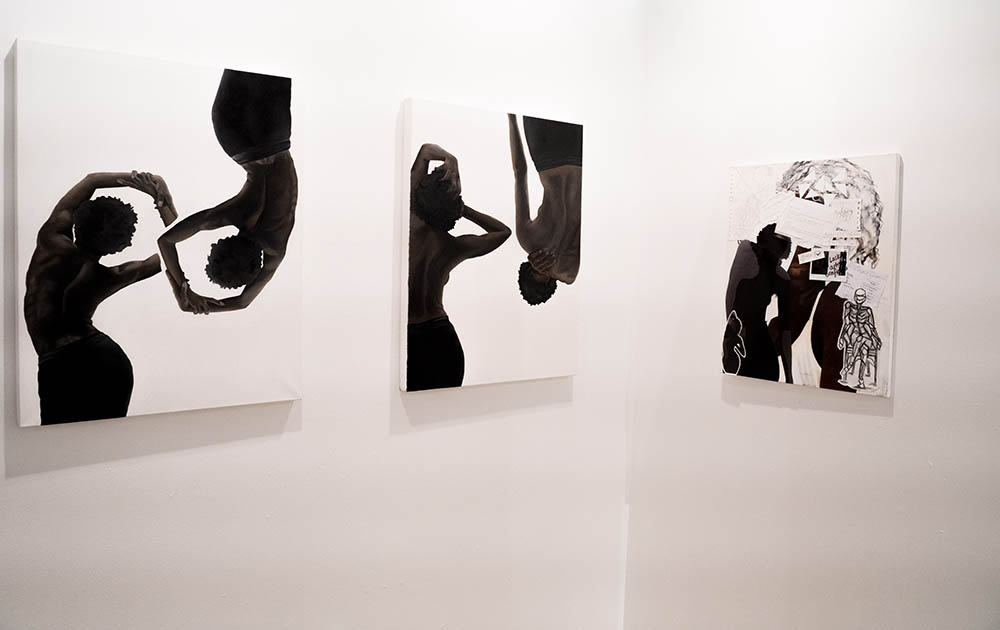 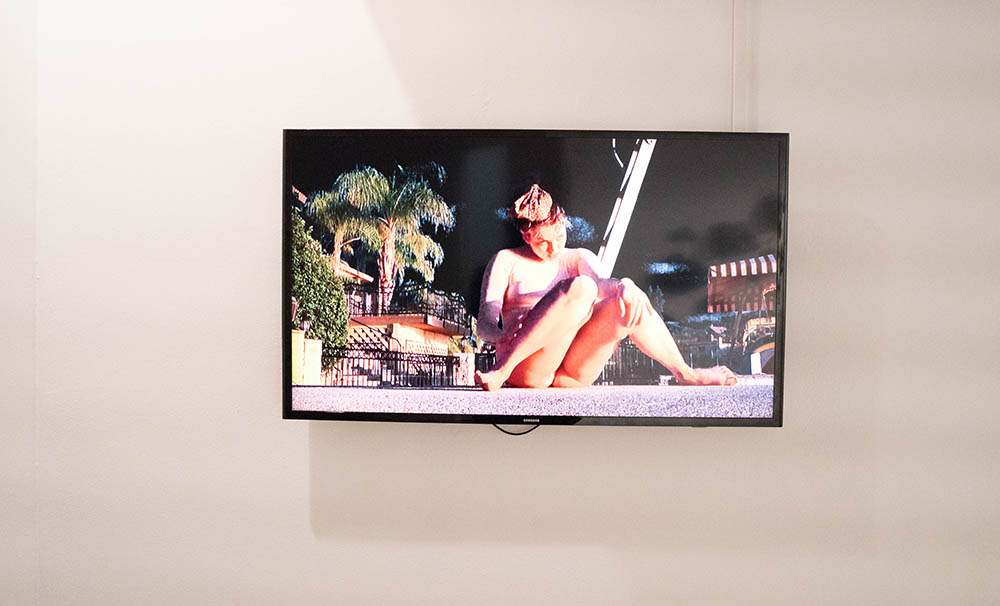 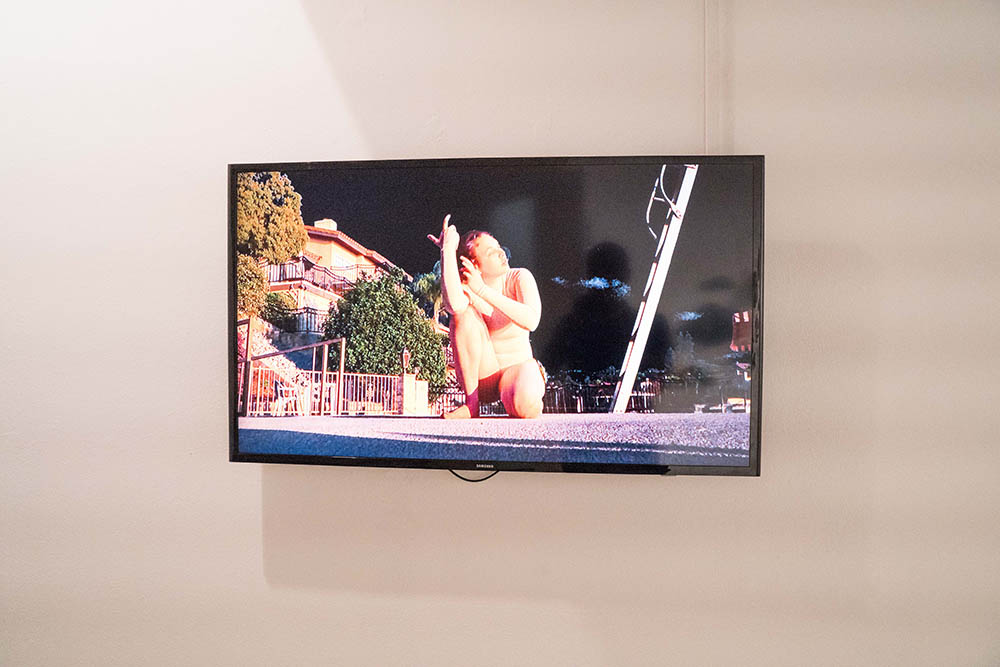 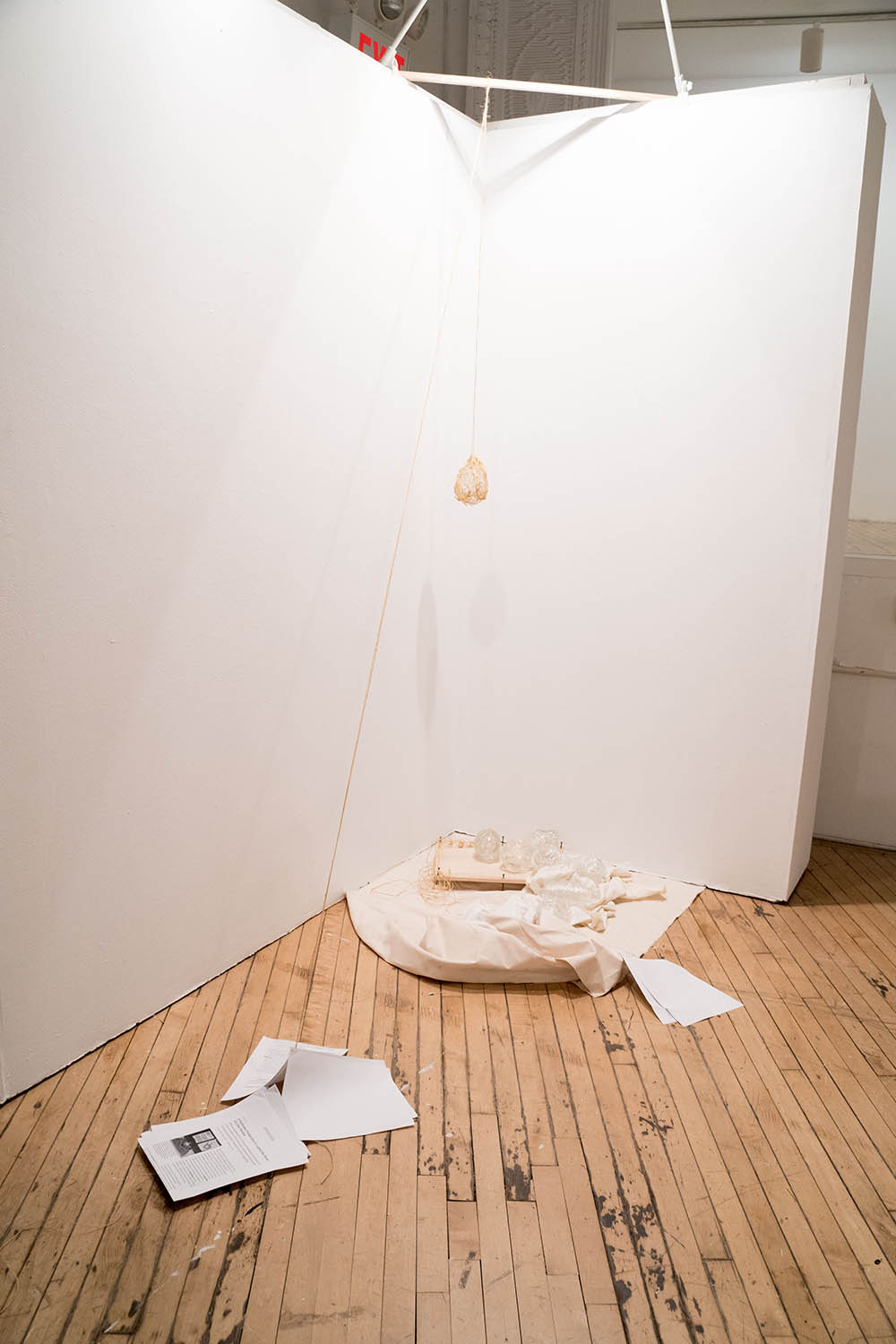 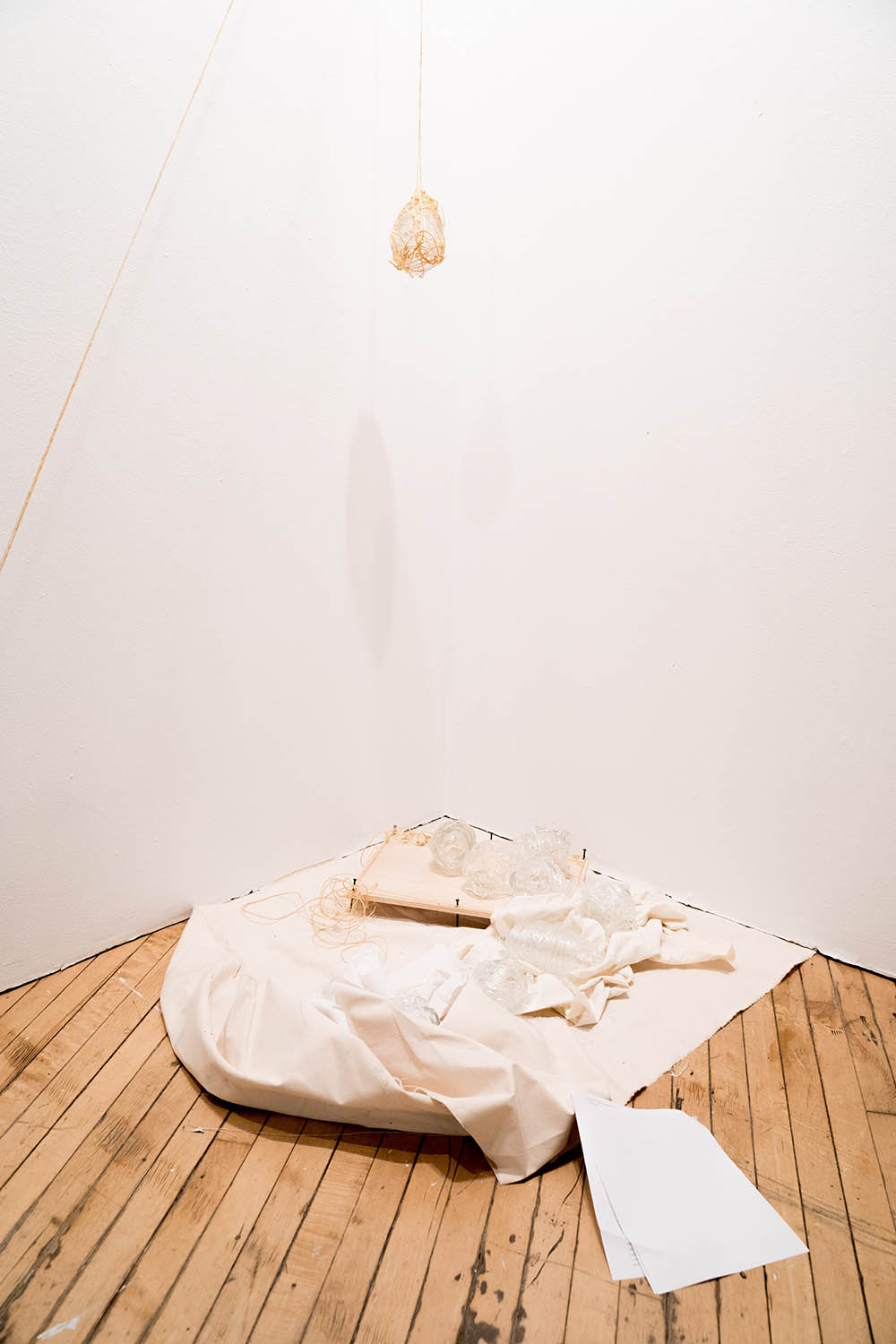 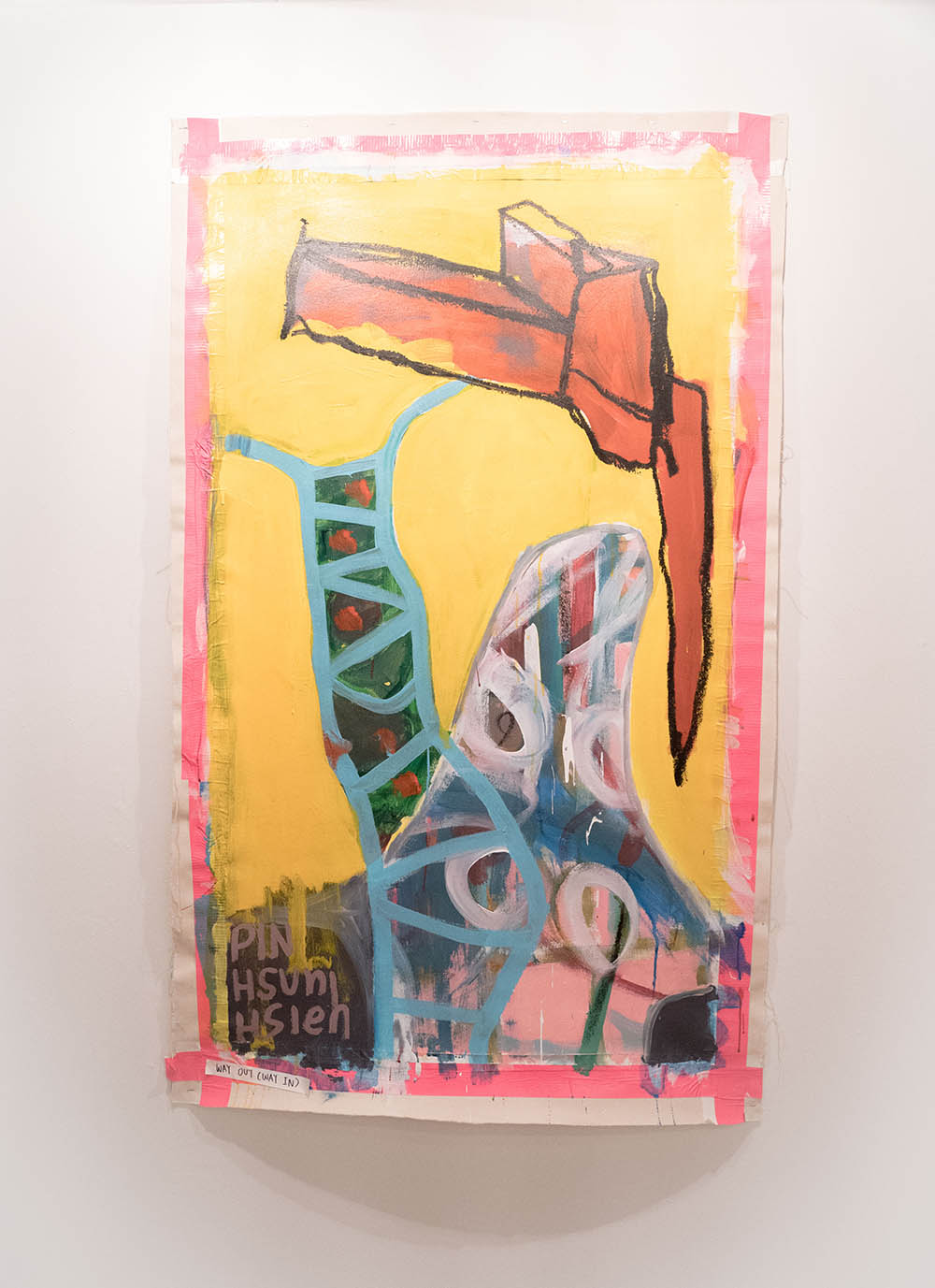 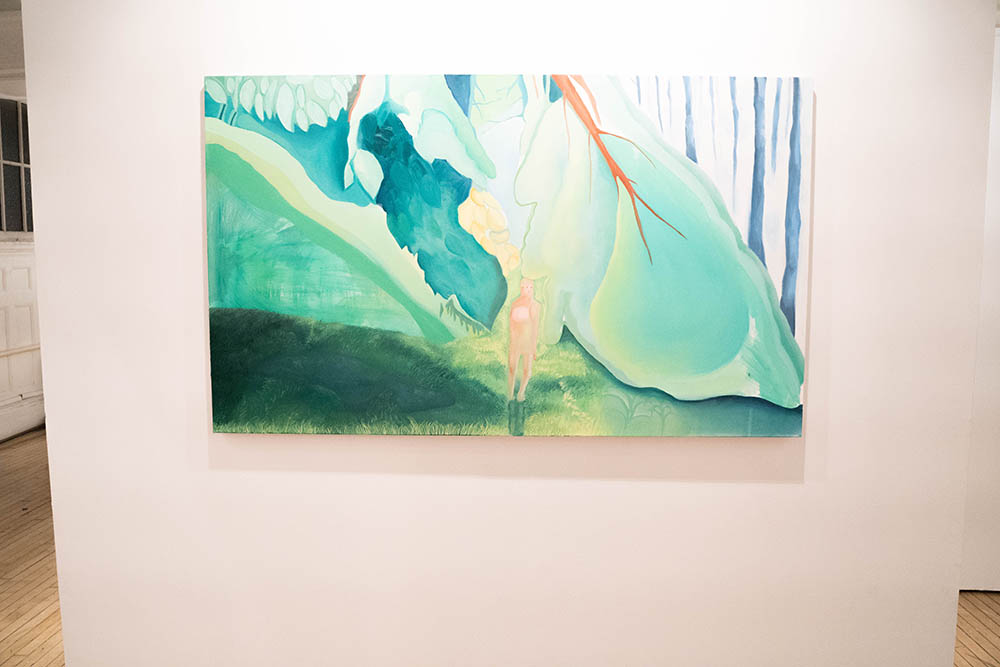 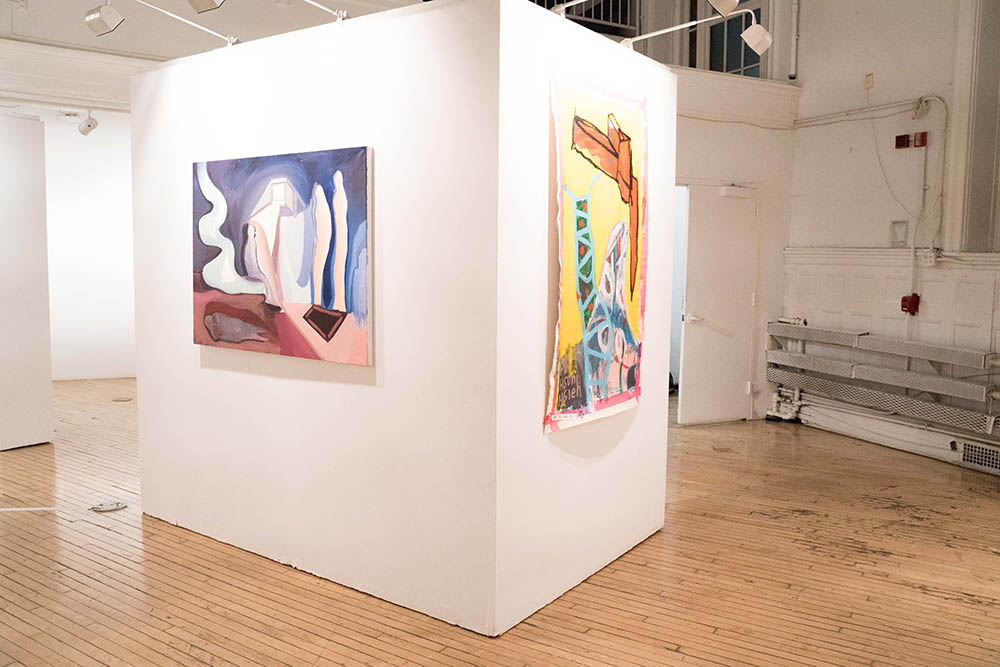 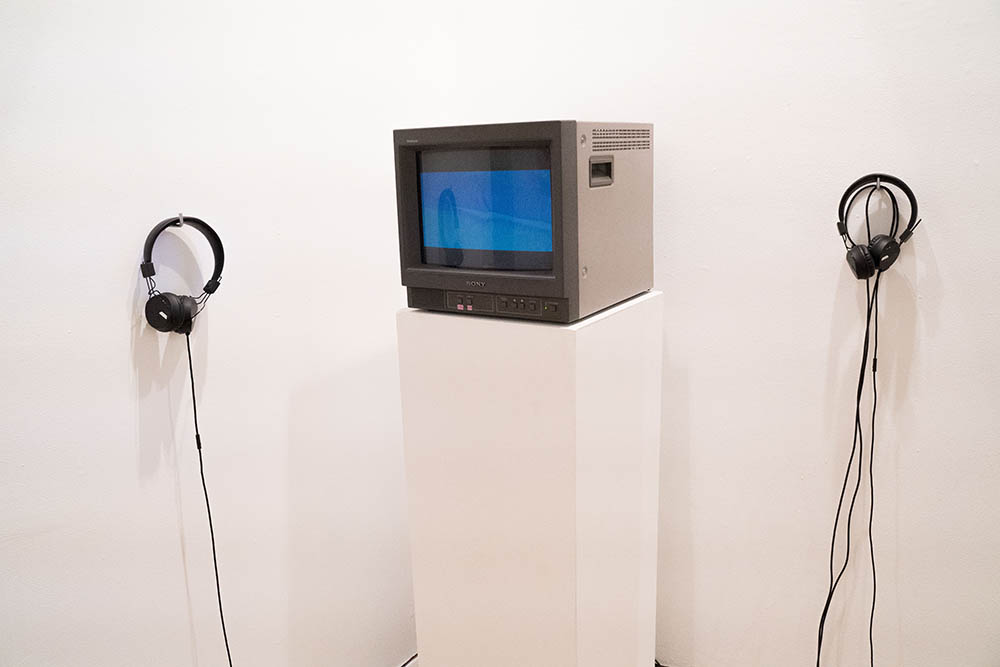 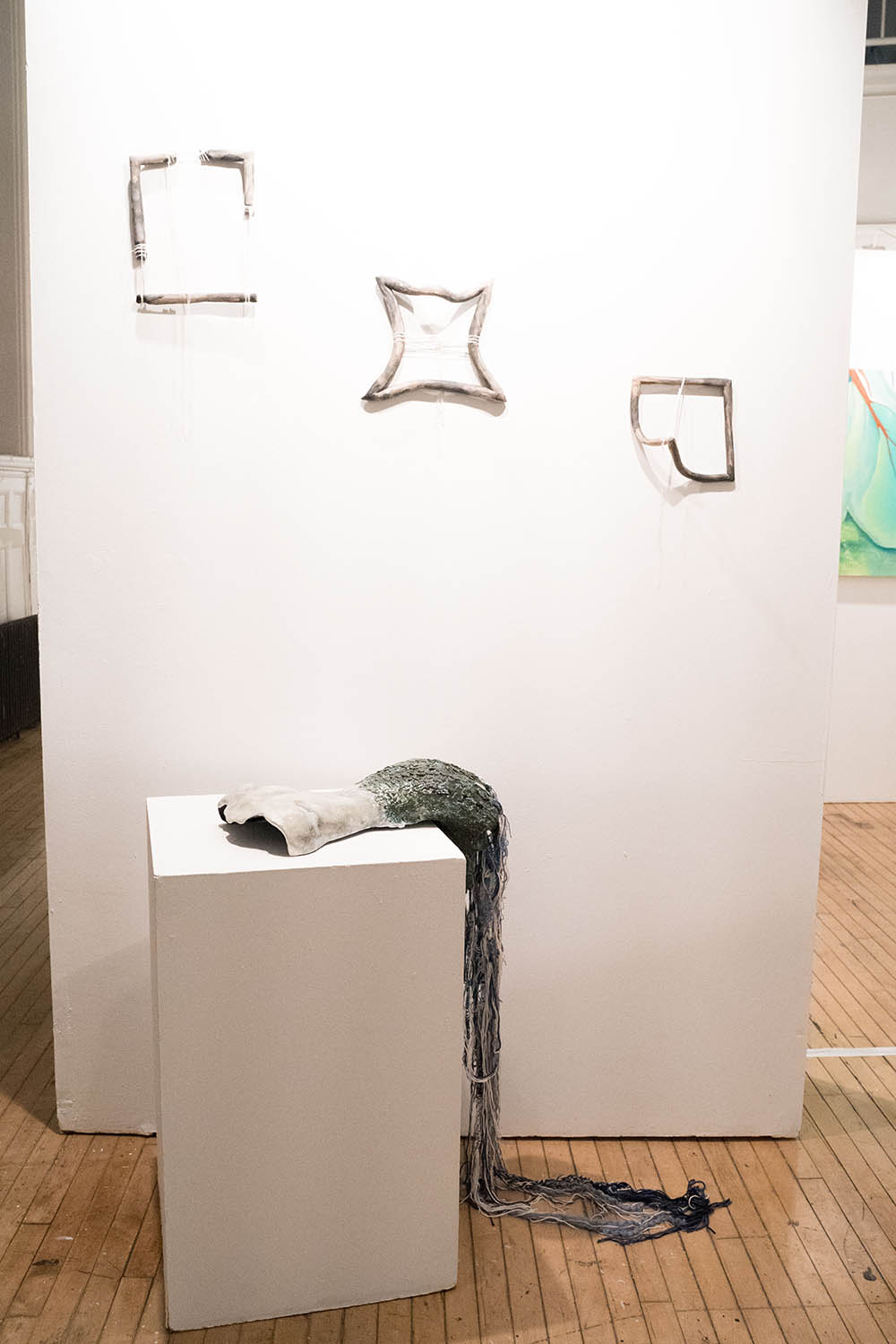 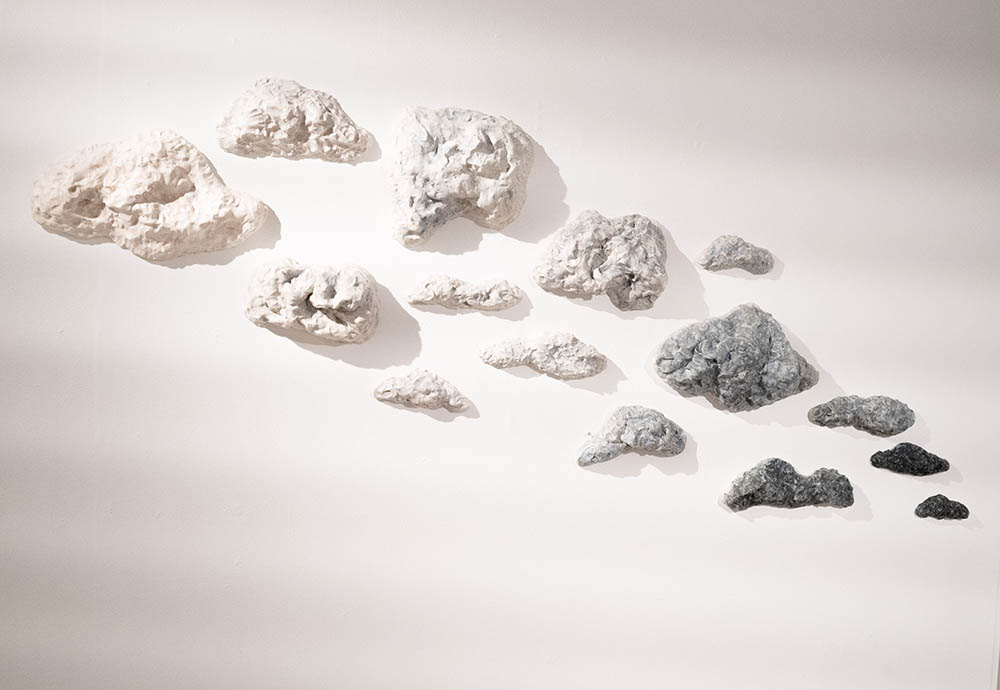 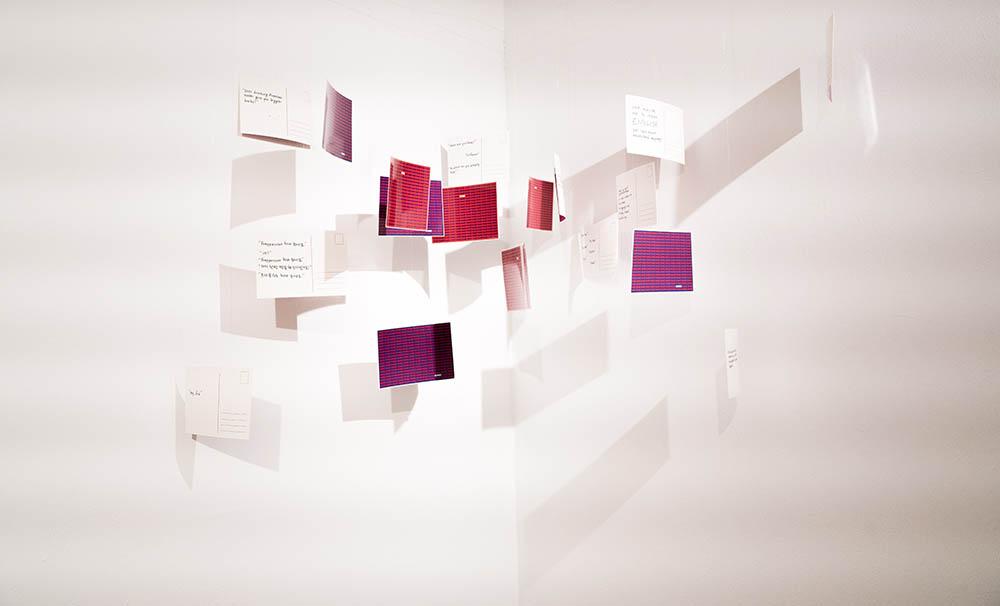 The concept of liminality is often charged with ambivalence, interpenetrating the territories of discrete, occasionally antithetical categories. It indicates the possibility of being  “both…and…” while simultaneously suggesting a status of being “neither…nor…” The exhibition brings together a group of eight artists who visualize the liminal space between a series of conceptual opposites. It is thematically organized into three sections. The first departs from the dilemma of choosing between “resistance and conformity” while the second explores the negotiation between “mind and body,” and the third focuses on the equivocal question of reality in “memory and dream.” The exhibition features works by Elizabeth Choh, Esther Cho, Xuan Guan, Jessica Chaeyoung Lee, Kaylee Reynolds, Valerie Saputra, Pin-Hsun Hsieh and Tina Zhou, who embody art’s potential to give form to the indescribable liminal space.

Esther Cho, as a Korean American woman, frequently explores the disorientation of identity she feels in belonging partially to two places but fully to neither. Working in digital or photographic media, she satirically addresses her experience as “foreigner” in either country, often with the use of language or wordplay. Deeply personal and highly tied to her experiences, her work expresses what many immigrants or multi-national individuals may feel, and how socially predetermined categories can often cause a crisis of identity and belonging.

Elizabeth Choh addresses liminality not only in terms of interiority and exteriority (in regards to her own lived experience) but also between differing textures and materials. Her use of ceramic and textile explores various versions of what it means to be soft, smooth, hard, malleable, and rough. She views art as an essential method of therapy, working through her anxieties and converting emotions into tangible objects. By materializing and projecting her internal reflections, she considers the subtle line between the subconscious and conscious, the real and the imaginary, and how our deepest feelings or dreams may spill out into our realities.

Xuan Guan’s work is deeply rooted in family experience. Having grown up in and around their grandmother’s restaurant in Flushing, Guan often reckons with personal and familial mythologies which have been taken for granted as truth. Frequently using found materials, food and glass, their work blurs the line between concept, object, and performance by emphasizing a multi-sensorial experience. In working with somewhat impermanent materials or works that do not archive well, Guan also considers ideas of permanence, both of the object and of its impression on the viewer.

The realization of Pin-Hsun Hsieh’s work relies on the space between viewer and painting, where contemplation takes place. Rather than executing a predetermined composition, Hsieh manifests his process through restless experiments with shapes, colors, and layering, the result of which strongly evokes Willem de Kooning’s work. Though eschewing figuration in favor of expressive abstraction, his paintings bear the mark of his personal life. The viewer is confronted with Hsieh’s vibrant palettes and bold strokes to feel the raw emotion, which is otherwise reserved in his demeanor.

Jessica Chaeyoung Lee’s works reflect her experience of growing up in a paradoxical environment, where she felt simultaneously nurtured yet unsafe. Working primarily in painting and video, she creates dialogue between the illusional safe haven constructed in her painting and the distressing reality that seeps into her video footage. Lee views painting as a therapeutic process through which she creates aesthetic pleasure. Contrastingly, her videos explore darker themes that evoke tension, anxiety and boredom. The alternation between starkly different emotional states opens up a space for the audience to glimpse at Lee’s position between two extreme mental states.

Kaylee Reynolds’ experience as a black, female, international student has largely shaped her artistic exploration. Her works generate a space in which she relates the colorism from her Jamaican background to racism in America. She not only challenges the social hegemony of whiteness but also confronts the radicalization of black art. When asked why she always paints black people, she answers that the decision was made for her before she started painting. As a practicing dancer, Reynolds utilizes movement to activate the in-between space of the black body and the white ground. While the tension remains unresolved, her body demonstrates the potential to cross the threshold.

Adopting the aesthetics of montage and collage, Valerie Saputra’s work weaves between memories and dreams. She films spontaneously in her quotidian life without a conceived script. However, her way of editing invalidates any autobiographical interpretation. Scraps of everyday life, seemingly insignificant and lurking in our mind, eventually find their way to our memories and dreams. Similarly, these footages manage to construct a disjointed series of ambiguous scenes that are simultaneously truthful and deceptive. Her work thus, challenges the capacity of moving images to construct a coherent narrative.

Working across mediums and subjects, Tina Zhou actively responds to the social and political issues and phenomena she has encountered. Often transforming her frustration and perplexity into humor and satire, she deploys art as “a coping mechanism” in the face of overwhelming circumstances. In her most recent work, Zhou designs a kind of leaflet, which mimics take-out menus offered by Chinese restaurants, and gives out copies to visitors. As a Chinese New Zealander who has spent her formative years in the United States, she reveals the understated social and racial baggage in the consumption of Chinese food in the United States. The (limited) distribution, (minimal) circulation, and (failure in) preservation of the leaflets further attest to how little power art yields, but also how it can resonate among people.

Betwixt and Between refuses to generalize the artists’ works into binary concepts. Rather than reaffirming dichotomies that the artists themselves disregard, the juxtaposition of conflicting concepts facilitates a reflection on the artists’ inner debate against themselves. Emerging out of the liminal phase of breaking down, this exhibition presents a joined effort to interface polarities and reveal intricacies.

Esther Cho, Who Am I, Where Am I, 2019, Installation (postcards), Variable

Xuan Guan, To those who loved her, her name was Song Yang, 2018 – Ongoing, Performance / Installation (glass, fabric, wire, wood), Variable