When a Digital Surface Meets a Mutable Apparatus…

The New York University Curatorial Collaborative is proud to present When A Digital Surface Meets A Mutable Apparatus…, on view from Tuesday, February 14 through Saturday, February 18 at 80WSE Gallery Project Space. This exhibition is a part of the 2017 Senior Honors Studio series, which features five consecutive single-week shows. This is the third year of the student-led initiative designed to connect graduate students in art history and curatorial studies from the Institute of Fine Arts with undergraduates in Steinhardt School’s Department of Art and Art Professions.

When A Digital Surface Meets A Mutable Apparatus… is a two-person show featuring works by Daniel Mock and Dylan Riley, curated by Regina Harsanyi. This show aims to illustrate contemplations on both contemporary film theory and the utility of the readymade, focusing on six pieces, with iterations created specifically for this exhibition.

Seemingly in conversation with the writings of Giuliana Bruno, Riley’s work incorporates the scrim as an essential element to his software-based, randomized controlled projections. Riley creates a constant interplay between the tangible and digital realms, further demonstrated through his use of generated still images, made available to the visitor both through a conventionally bound artist book as well as scattered pages strewn across the gallery floor.

Mock plays with readymades in an intimate and transformative way, site-specifically reinventing their utility with each new context in mind. For example, in this exhibition, Pulpit (2017) interacts with Riley’s artist book by assuming the role of plinth or stand. Mock’s sculptures often meld with the distinct features of the spaces that temporarily houses them. Throughout this exhibition, whether attention is drawn to the texture of a screen, or the shift in utility of an otherwise mundane object, these “surfaces” are intended for careful consideration and cannot be overlooked.

When A Digital Surface Meets A Mutable Apparatus… is documented in an accompanying publication featuring a curatorial essay by Regina Harsanyi and reproduced images of additional works by Mock and Riley. 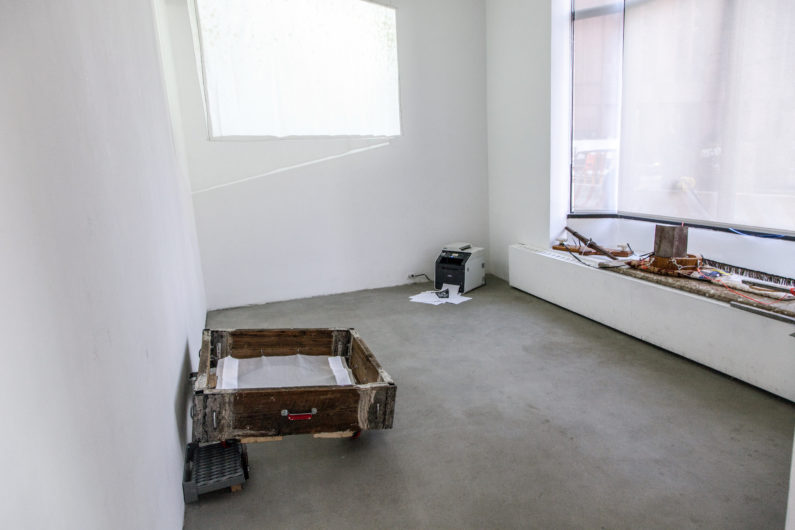